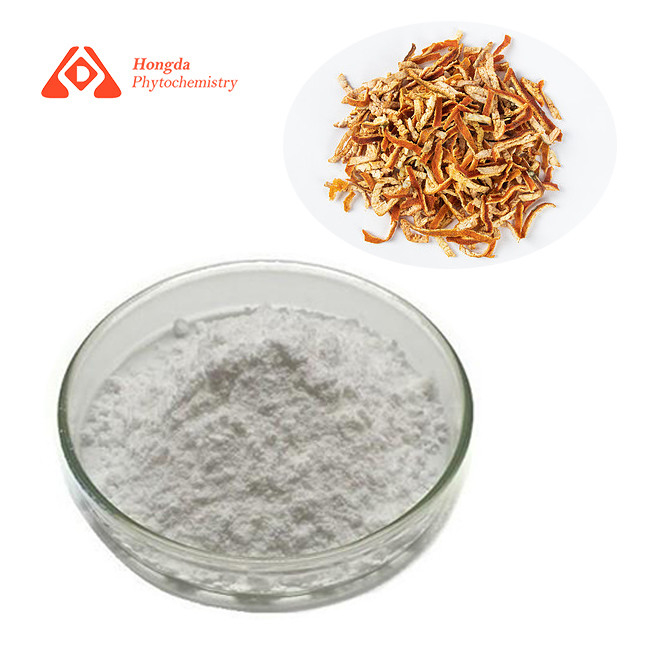 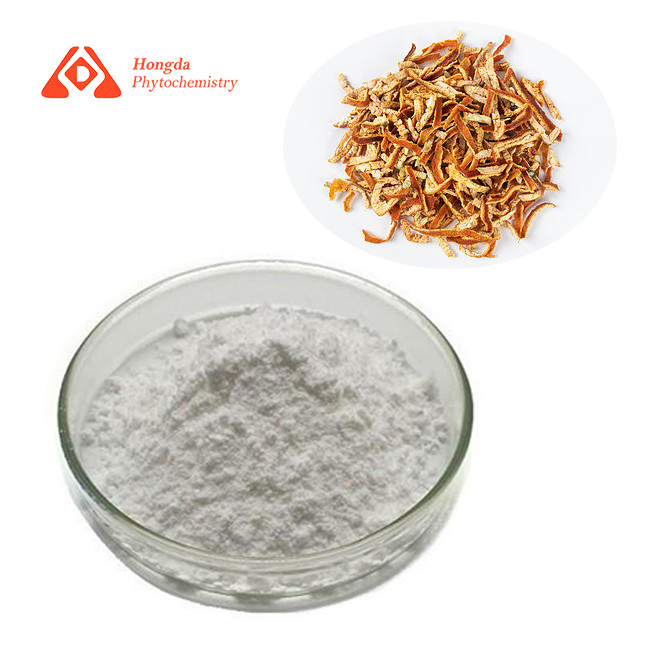 Neohesperidin dihydrochalcone (Neohesperidin DC, NHDC) is a flavonoid derivative derived from the hydrogenation of neohesperidin extracted from natural citrus plants. It is an artificial sweetener. Dihydrochalcone is a very important class of active ingredients with antioxidant, antitumor, antidiabetic, antibacterial and estrogen-like effects. It is approved as a sweetener in Europe. In 1997, neohesperidin dihydrochalcone was listed as a supplementary variety in the "Hygienic Standard for the Use of Food Additives" by the Ministry of Health of the People's Republic of China, which can be used in the food industry. It has a strong sweetness (1500~1800 times the sweetness of sucrose), a refreshing taste, a lasting aftertaste, and an excellent effect of shielding bitterness.

1. Research on the protection of the liver

Zhang Shuo et al. investigated the effects of four flavonoids, including neohesperidin dihydrochalcone, apigenin, phloridzin and proanthocyanidin, on CCL4-induced liver fibrosis in mice. The ALT/AST content in the serum of the model mice and the hydroxyproline content in the liver tissue were reduced; at the same time, the pathological examination showed that the degeneration, necrosis and liver fibrosis of the liver cells in each group of mice were alleviated to varying degrees, proving that the new orange Pedroside dihydrochalcone has anti-CCL4-induced liver fibrosis in mice. Another study shows that flavonoids such as chalcone can inhibit the synthesis of collagen in HSC-T6 cells in vitro, and can be used as raw materials for hepatoprotective agents.

Suhrez et al found that neohesperidin dihydrochalcone also has the effect of inhibiting gastric acid secretion, so it can be used as an antacid in combination with aluminum hydroxide gel or other antacids, so that the latter is resistant to gastric acid. The effect has been improved. In the long run, the new methyl hesperidin dihydrochalcone is expected to become the raw material of the new gastric medicine.

Mao Dongsen et al. found that NHDC has a significant protective effect on the injury of the air-blood barrier in the lung tissue of mice induced by influenza virus, which may play a role by up-regulating the expression of AQPS protein. To provide experimental basis for the clinical application of NHDC and the research of anti-influenza virus drugs.

Wu Peicheng et al. found that NHDC, as a flavonoid derivative, has the functions of removing free radicals in the skin, promoting skin metabolism, reducing pigmentation, and moisturizing the skin. In vitro experiments found that the IC50 of NHDC on tyrosinase was 82.02µm/L, respectively It is about 2 times and 60 times that of whitening agents VC and β-arbutin. The human patch experiment found that NHDC is not irritating to human body; the total effective rate of 2% NHDC gel on melasma is 89.6%. NHDC is expected to be used as a new type of whitening agent cosmetic.

Zhu Siming et al. analyzed the mechanism of the antioxidant activity of hesperidin and its derivatives, and found that neohesperidin dihydrochalcone has stronger antioxidant properties than hesperidin, and can be used in the manufacture of oil and oil-containing foods. , Efficient and non-toxic antioxidants.

Bok et al. confirmed through animal model experiments that NHDC can effectively inhibit the activities of HMG-COA reductase and ACAT, significantly reduce the plasma cholesterol and neutral lipid levels in animals, and inhibit the macrophage-lipid complex in arteries. Accumulation on the endothelial wall prevents cardiovascular complications such as arteriosclerosis and vascular circulatory diseases. At the same time, it was also found that NHDC can also significantly increase the plasma high-density lipoprotein (HDL) content of animals, thereby promoting the metabolism of cholesterol, and can effectively treat or prevent diseases related to elevated lipid levels.

Takii et al. found that NHDC can reduce the blood sugar level of animals in the study of the effect of phenolic glycosides on lowering blood sugar. The latest research shows that NHDC can inhibit α-amylase in mammals to varying degrees, reduce the body's absorption of sugar, and thus achieve the effect of lowering blood sugar, which is very important in medicine, especially for diabetic patients.

1.High sweetness and low calorie. High sweetness (1500-1800 times the sweetness of sucrose), refreshing taste, lasting aftertaste, and excellent shielding bitterness effect, the glycoside of neomethylhesperidin dihydrochalcone is hydrolyzed in the human body, The base does not participate in metabolism, so its caloric value is extremely small (8.36J/g), which can be used as a low-energy food sweetener.

3.Good stability, non-toxic, fast metabolism. Its properties are very stable whether used in acidic or alkaline environments, and it is the most stable and safe sweetener known, which increases the broad spectrum of applications.

5.It has antioxidant, lowering cholesterol and lowering blood sugar and other physiological activities.

3.Flavoring agents (bitter masking agents) and flavor modifiers: NHDC can act on bitter taste receptors when it is lower than the sweetness threshold, thereby increasing the threshold for bitterness, and the debittering effect is significantly better than that of general sweeteners. Adding NHDC to soy milk with walnuts can reduce the aftertaste of "walnuts"; it can mask the vinegary and spicy smell in tomato sauce; compounding with stevia can overcome the bitterness of stevia, and compounding with AK sugar can suppress its metallic taste . NHDC is used in European versions of Viagra and Pediatric ibuprofen suspensions to mask the bitter taste of the drug. The mixture obtained by mixing NHDC as a flavor enhancer and aspartame can be applied to chewing gum, which is not only sweet and delicious, but also prolongs and maintains the flavor. When added to margarine, it can enhance the flavor and smell of butter; when added to fruit products, it can enhance the fruit flavor.

4.Food flavors and fragrances: The flavor of NHDC is similar to maltol and ethyl maltol, and can produce obvious synergistic effects with maltol and ethyl maltol. Adding NHDC can harmonize, improve and enhance the original flavor in food. , thereby improving food flavor, texture and mouthfeel. The NHDC is mixed with oily aromatic compounds, stabilizers and preservatives to prepare a liquid fragrance and flavoring composition, which has an aroma-enhancing effect on the target food.

5.Neomethylhesperidin dihydrochalcone has a wider range of uses in feed. Adding it to the feed as a sweetener can make the feed taste super sweet, increase the appetite of piglets, significantly promote its growth and reduce the feed consumption per kilogram of weight gain. Neomethylhesperidin dihydrochalcone and other When the sweetener is used in combination, especially when it is compounded with saccharin, it can produce excellent synergy. NHDC has a prebiotic-like effect. When NHDC is added to the piglet feed, with the increase of lactic acid concentration in the intestinal cavity, the lactobacilli at the entrance of the piglet's cecum also increase significantly, which can affect the symbiotic intestinal flora and regulate its body. immunity and reduce intestinal diseases.

6.Adding this compound sweetener product to animal diets can greatly improve the flavor and palatability of the feed, and mask and improve certain ingredients in the diet (such as certain protein raw materials, vitamins, metal ions, and some pharmaceutical ingredients, etc. ) with an unpleasant bitter and astringent taste, thereby increasing the appetite of young animals and promoting their growth.

Zong Minling et al. introduced that the feed additives composed of new methyl hesperidin dihydrochalcone and polysaccharides (astragalus polysaccharides, acanthopanax polysaccharides, licorice polysaccharides) can replace or reduce antibiotics and growth-promoting hormones and other pharmaceutical additives; Improve the production performance of sows, shorten the birth process of sows, recover quickly after giving birth, and have a larger feed intake; the piglets eating the premix have a large feed intake and a low feed-to-meat ratio; the incidence of Newcastle disease in chickens eating the premix is low.

In Japan it is used as a flavoring agent

As a sweet substance in the catalogue of feed additives in my country (2013) Ministry of Agriculture Announcement No. 2045