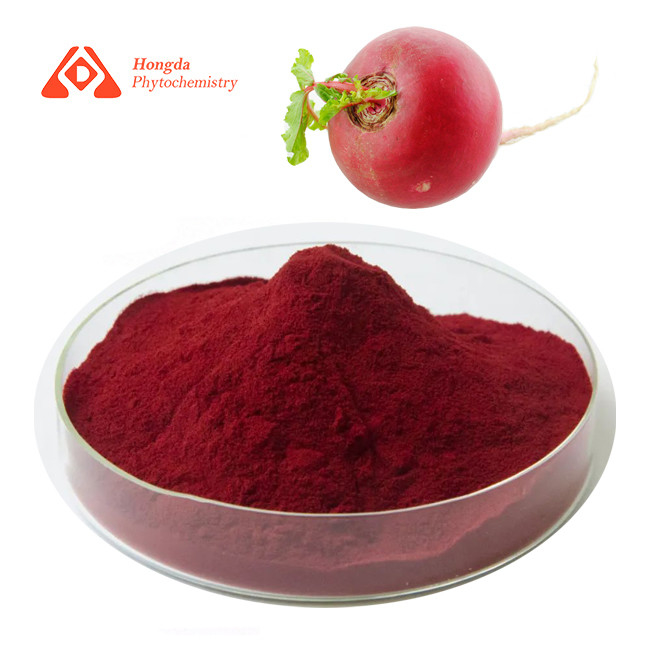 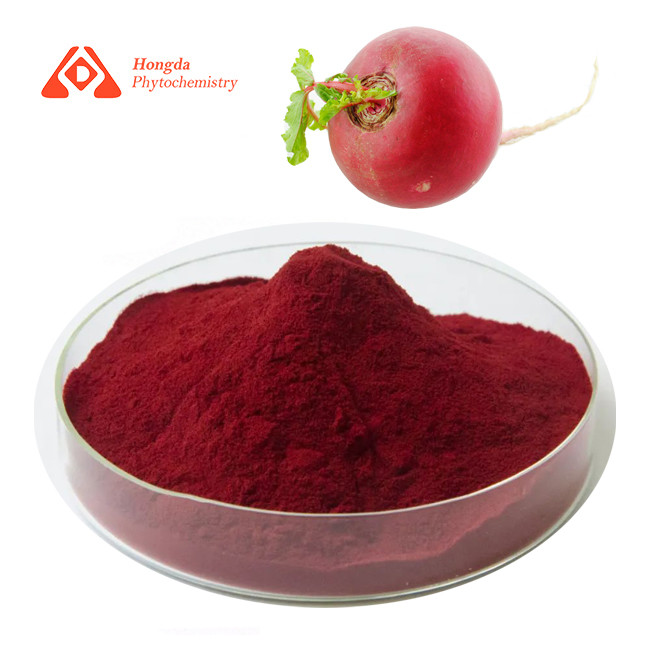 Red radish pigment is a glucoside derivative of pelargonidin, which is a water-soluble anthocyanin. Radish red pigment is a dark red amorphous powder, which is easy to absorb moisture and agglomerate, but generally does not affect the use effect. Radish red is one of the natural pigments allowed by the State Food Additives Standards Committee and has a wide range of applications in the food, beverage, cosmetic and pharmaceutical industries.

At present, the use of some artificial synthetic food additives in food, beverages, and medicines has been strictly prohibited in Europe, America, Japan, and other countries and regions; with the occurrence of mad cow disease and foot-and-mouth disease, animal-derived pigments have gradually been banned in many countries. The global demand for natural pigments will further expand. Radish red pigment is a natural ingredient with relatively large market demand in my country's natural pigment industry. However, because the smell of radish has become a key problem restricting the development of red radish pigment, its price has also been greatly affected for a long time.

In recent years, through the continuous improvement of technical processes in the industry, radish red pigment, as a pure natural food coloring, can be safely added to wine, medicine, cosmetics, food, and beverages, and has gradually been recognized by the international market. According to incomplete statistics, the annual sales of natural pigments in the European Union and the United States in 2011 exceeded 400 million US dollars, and the annual growth rate is 8%. Japan imports more than 3,000 tons of natural pigments every year, and the annual demand in the international market is about 8,000 tons. , the growth rate of my country's domestic demand is not less than 15%. The domestic and foreign markets of radish red pigment are always in short supply.

We can sow in four seasons according to market demand (sowing at different altitudes throughout the year), which fully guarantees the quantity and quality of raw material supply. At present, the main demand specification of red radish pigment in the market is 30-90 color price, the foreign market demand is the main, and the domestic market demand is supplemented. However, with the gradual improvement of national laws and regulations, and the continuous enhancement of corporate and personal health and health awareness, the domestic market has gradually expanded after 2012, with an annual growth rate of 40-50%. Foreign market demand is mainly dominated by developed countries such as Europe, America, Japan, and South Korea.

Radish red edible natural pigment can be used in acidic food, daily necessities, medical and health food, etc., among which the application in the food field is the main one. Food applications Beverages, candy, vinegar, cakes, preserves, jams, prepared wine, etc.; foreign markets also have some applications in the field of daily chemicals and medicine.

1. Application of radish red pigment in food: color, as one of the three elements of food (color, aroma, and taste), is of great significance for improving food preference and stimulating appetite. The radish red pigment of carrot is extracted by chemical method and used as a food additive, which solves some shortcomings of synthetic pigment and becomes a new research direction. Japan now has a lot of research in this area, and the applied foods include jelly, jam, candy, and tomato sauce.

2. The application of radish red pigment in beverages: in the preparation of wine, carbonated beverages, and fruit juice (flavored) beverages, it plays a role in coloring or complementary color.

3. Application of radish red pigment in cosmetics: Cosmetics are beauty necessities in people's daily life. If the cosmetics contain synthetic pigments, long-term use will cause a sensitive reaction to light, resulting in hyperpigmentation and inflammation such as skin flushing, burning, and pimples. Different from synthetic pigments, natural pigments are not only non-toxic but also have certain nutritional and even certain pharmacological effects.

4. The use of radish red pigment in soap: The natural pigment can be used as an additive to soap, which can make the color of soap bright. Using natural pigments can reduce the harm of using artificial pigments, and is more in line with the requirements of green environmental protection.

5. The application of radish red pigment in the textile industry: Natural pigments are also widely used as dyes in the textile, clothing, and home textile industries. The extraction of pigments from natural plants as dyes is in line with the development of the times. With the deepening of the concept of green environmental protection, Natural pigments will be widely concerned and used.

6. The application of radish red pigment in other industries: natural food coloring is not only a colorant, it has become a multi-functional product that beautifies people's lives, is beneficial to human health, and improves the product quality of the food industry, food printing industry, and food packaging industry. Substances and natural pigments will be more widely used in more fields.