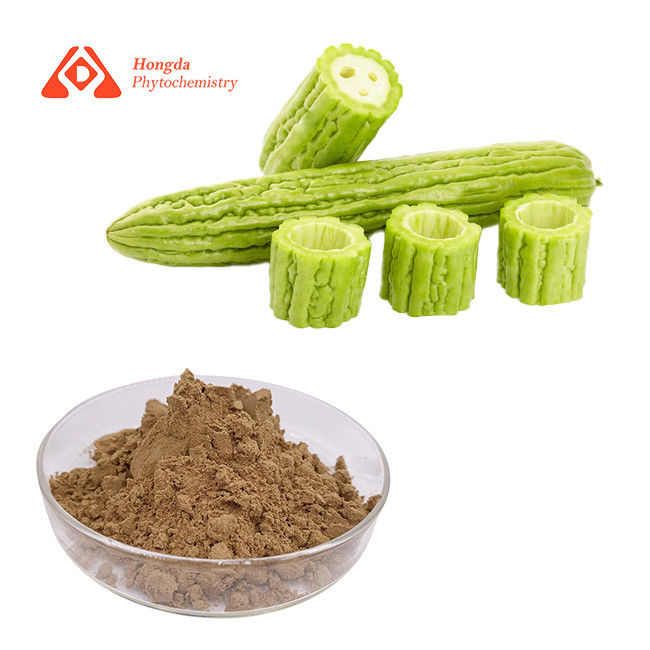 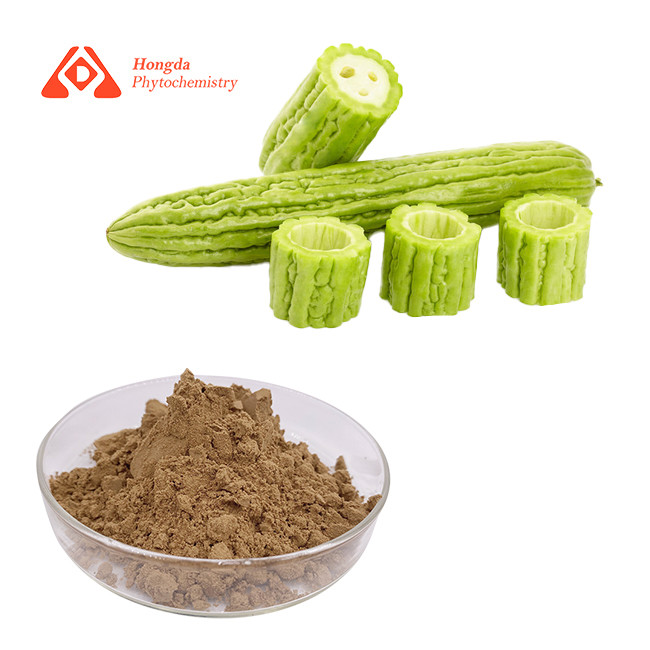 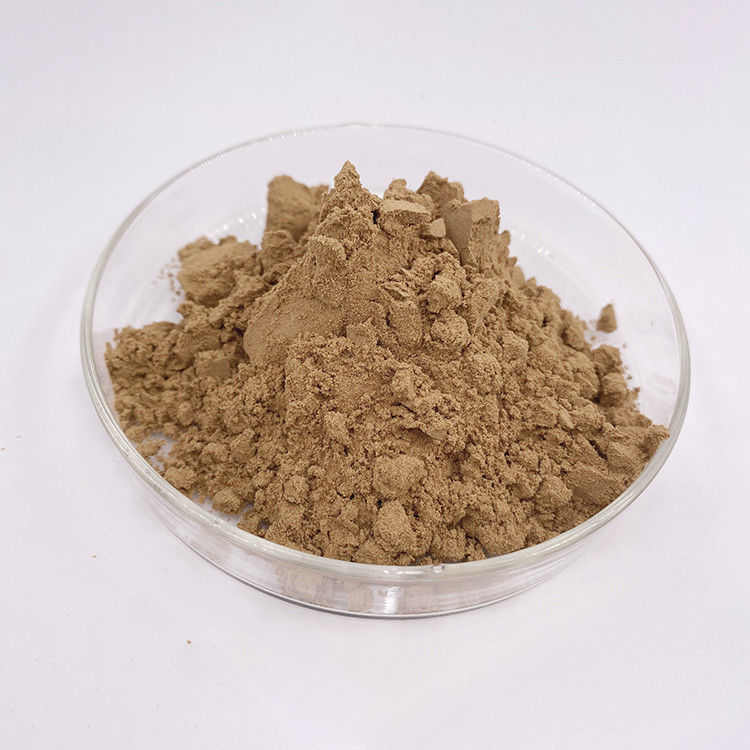 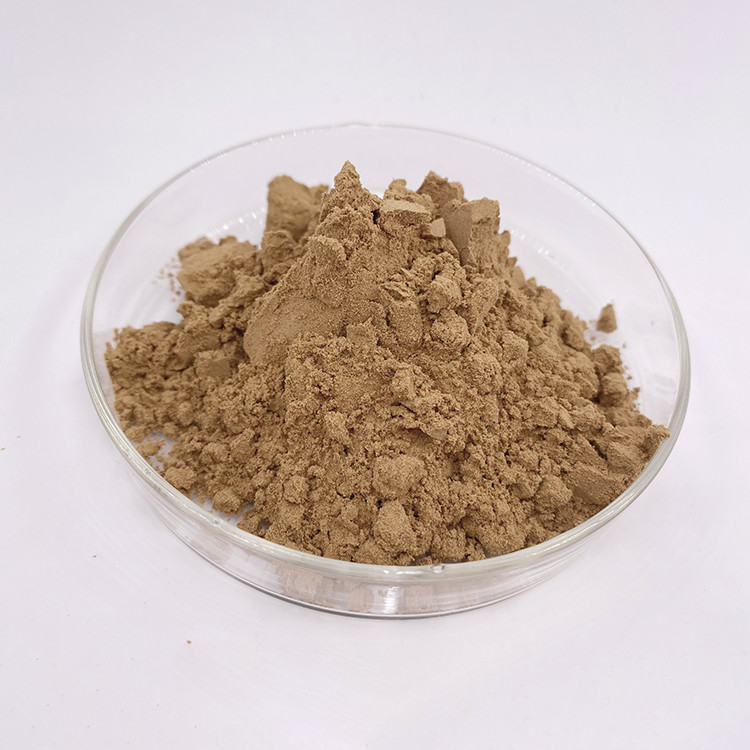 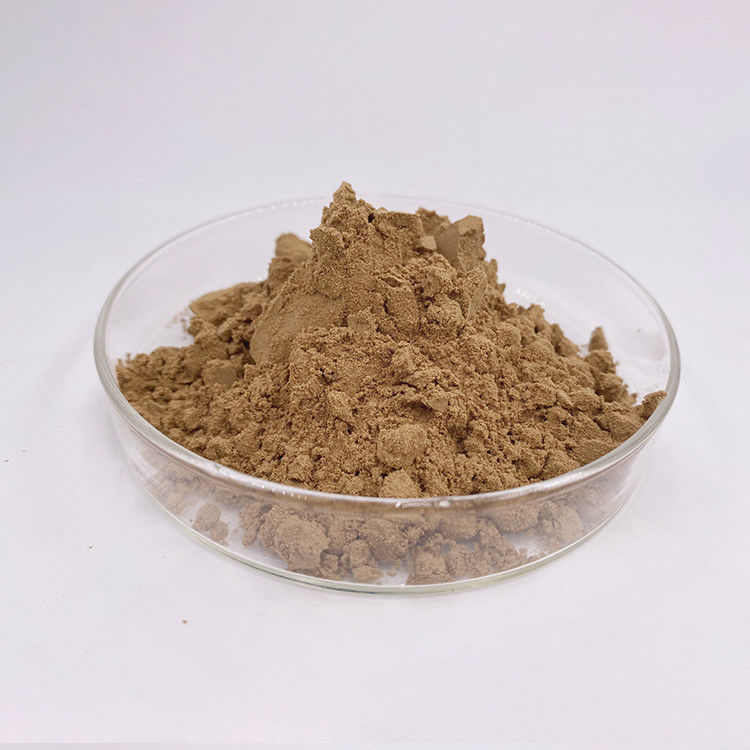 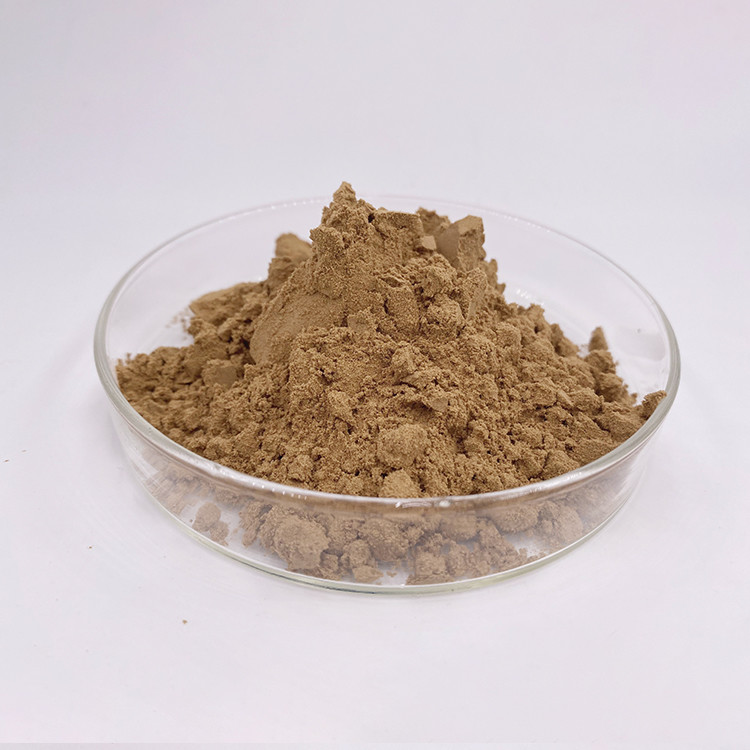 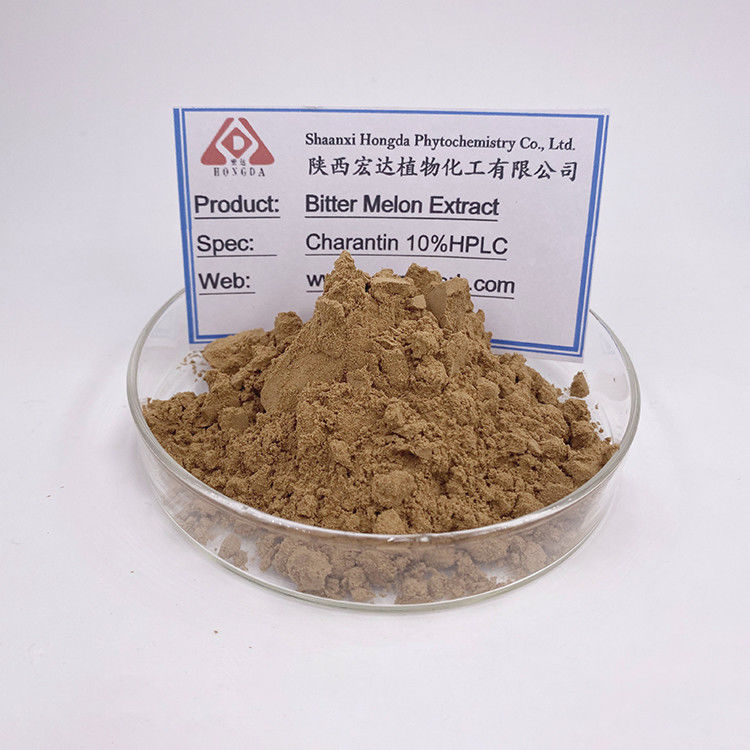 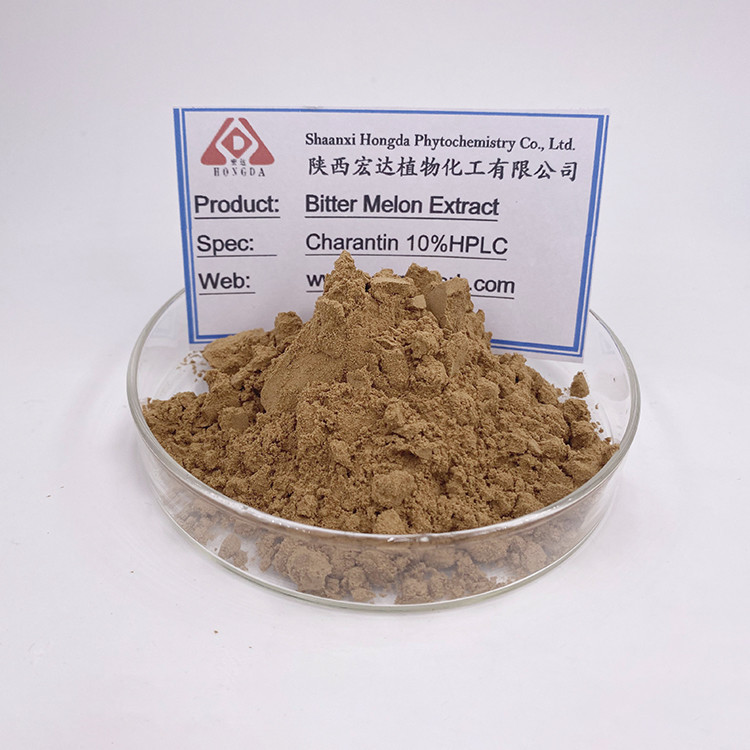 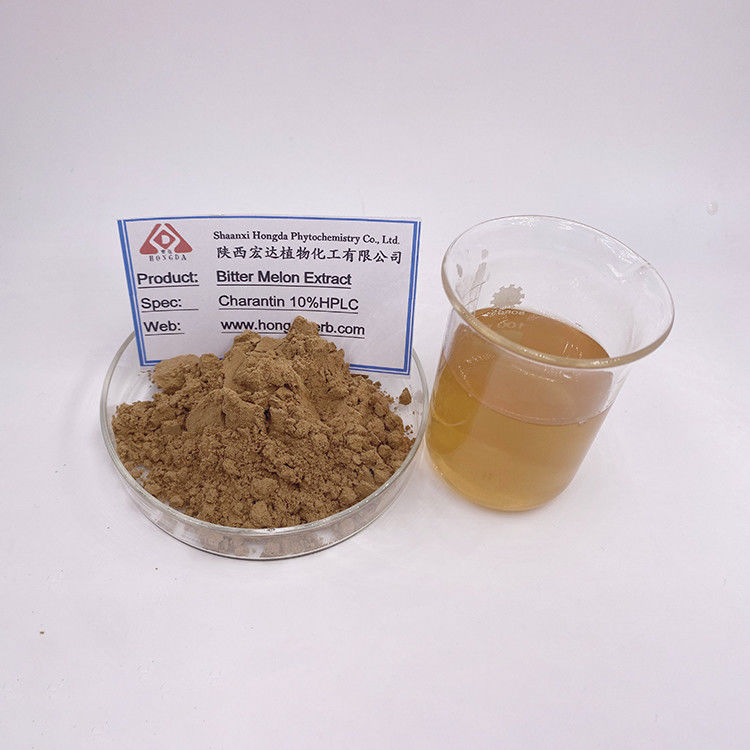 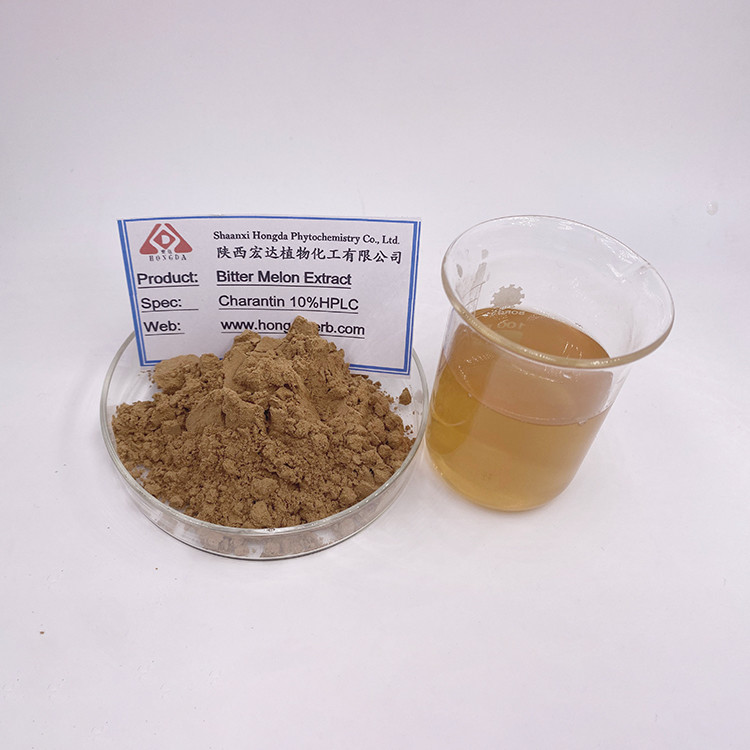 Momordica charantia extract is Momordica charantia MomordicacharantiaL. The fruit extract contains balsam pear glycoside (Charantin, is the molecular mixture of β-sitosterol-β-glucoside and 5,25-dosterenol -3-glucoside), it also contains niacin, 5-hydroxytryptamine, various vitamins and various amino acids, etc. It has pharmacological activities such as Chemicalbook-lowering blood sugar, anti-cancer, antibacterial, anti-virus, anti-fertility, enhancing immunity, etc. The hypoglycemic effect of balsam pear extract has attracted much attention and has been deeply studied and widely used in Asian countries such as India, China and Japan. In medicine, balsam pear extract has been applied to the treatment of diabetes and AIDS. This information is edited and organized by Chemicalbook Shi Yan.

Bitter Melon Extract has good hypoglycemic effect, known as plant insulin. Full component extract, used for type 2 diabetes three times a day, 2g each time, can maintain the normal level of blood sugar, because it is extracted from plants, so compared with Western medicine hypoglycemic drugs, it has no toxic or side effects.

The fruit of this plant is the same as its name-it tastes bitter. Although the seeds, leaves and vines of balsam pear can be used, its fruits are the safest and most widely used medicinal parts of the plant. The juice of its leaves and fruits or seeds are used as insect repellent; In Brazil, the dose of it as insect repellent is 2 to 3 seeds. The immature fruit of balsam pear is more bitter because it contains balsam pear bitter. Momordica sorbitin is mainly composed of a variety of triterpenes, including Momordica sorbitin A- E,K,L and momardicius I, II and III. Roots and fruits are used as abortion drugs.

1.Anti-diabetes effect
Momordica charantia contains steroid saponins such as Momordica charantia, insulin-like peptides and alkaloids, which endow Momordica charantia with hypoglycemic activity. Momordicin stimulates the release of insulin and hinders the formation of glucose in blood flow. This function may play a huge role in the treatment of diabetes, especially non-insulin dependent diabetes. The hypoglycemic function is attributed to two substances:(1) momordicin-a crystalline substance obtained from ethanol extract of Momordica charantia fruit. Momordicin reduced the blood sugar of 42% of the total number of rabbits in the experiment under the condition of controlling the dose of 50 mg/kg. Momordicin shows the effect of pancreas and outer pancreas, and has slight antispasmodic and anticholinergic effects. (2)P-insulin (or v-insulin because it is plant insulin). It is structurally macromolecule polypeptide configuration, while pharmacology is similar to bovine insulin. P-insulin consists of two peptide chains linked by disulfide bonds. It has hypoglycemic effect on subcutaneous and muscular administration of P-insulin in diabetic patients, and its peak period is different from that of bovine insulin after 2 hours, appearing after 4-8 hours.

2.Antiviral function and others
Balsam Pear standard extract has been proved to be effective for psoriasis, susceptibility caused by cancer, pain caused by neurological complications, and may delay the onset of cataract or retinopathy and inhibit HIV by destroying filtered poisonous bacteria DNA. Its anti-cancer characteristics are partly due to its enhancement of immune function. Studies have shown that Momordica charantia extract inhibits lymphocyte proliferation and the activity of macrophages and lymphocytes.

1. Hypoglycemic effect after injecting balsam pear extract to normal or alloxan diabetic rabbits, blood sugar can be significantly reduced, and subcutaneous injection of anterior pituitary extract can cause hyperglycemia in rats, the water extract of balsam pear juice can also reduce blood sugar. Balsam Pear glycoside can also reduce blood sugar after being taken to rabbits, and its mode of action is similar and strong to that of toluene transbutylurea, which reduces blood sugar by stimulating pancreatic β-cells to release insulin. For cats with removed pancreas, the hypoglycemic effect has not completely disappeared, so its hypoglycemic action includes two factors: Pancreas and non-pancreas.

2. Anti-fertility effect a Chemicalbook peptide chain plant protein proposed from balsam pear can inhibit the development of male mouse sperm and has remarkable anti-fertility activity with an effective rate of more than 88%.

4. Anti-cancer effect the water extract of Momordica charantia 25-400 μg/ml has the effect of inhibiting the growth of rat prostate undifferentiated carcinoma cells, and 400 μg/ml can completely inhibit the growth of cancer cells; momordica charantia water extract also inhibits thymidine involvement in DNA; It is generally believed that the growth of cells, the synthesis of DNA and RNA are all related to the GMP system in cells, while the GMP cyclase activity in tumor tissues is higher than that in normal tissues, the ChemicalbookcGMP level of balsam pear water extract on normal prostate tissues, differentiated prostate cancer cells and undifferentiated prostate cancer cells can be reduced, which may be the mechanism of its anti-cancer effect. Momordin50μg/kg in Momordica charantia seeds can completely inhibit the growth of mouse Ethereum ascites cancer.

7. Inhibition of HIV balsam pear extract can inhibit the surface active Chemicalbook of HIV, selectively kill lymphocytes and macrophages infected by HIV, and significantly increase the number of T4 cells in patients, t4/T8 ratio is relatively normal and is likely to become a new anti-AIDS drug. The type I inhibitor of balsam pear immunodeficiency virus (InhibitorofHIV-I) isolated from balsam pear kernel also has inhibitory effect on HIV.

Dosage: take 200-250mg daily to reduce the effect of diabetes.

2. One fresh balsam pear with heatstroke and fever, cut off and remove it, add it into the tea, then join it, hang it in a ventilated place and dry it in the shade. 6~9g each time, Fry in water or soak in water instead of tea.

3. Mash a cup of dysentery fresh balsam pear juice and take it with boiled water.